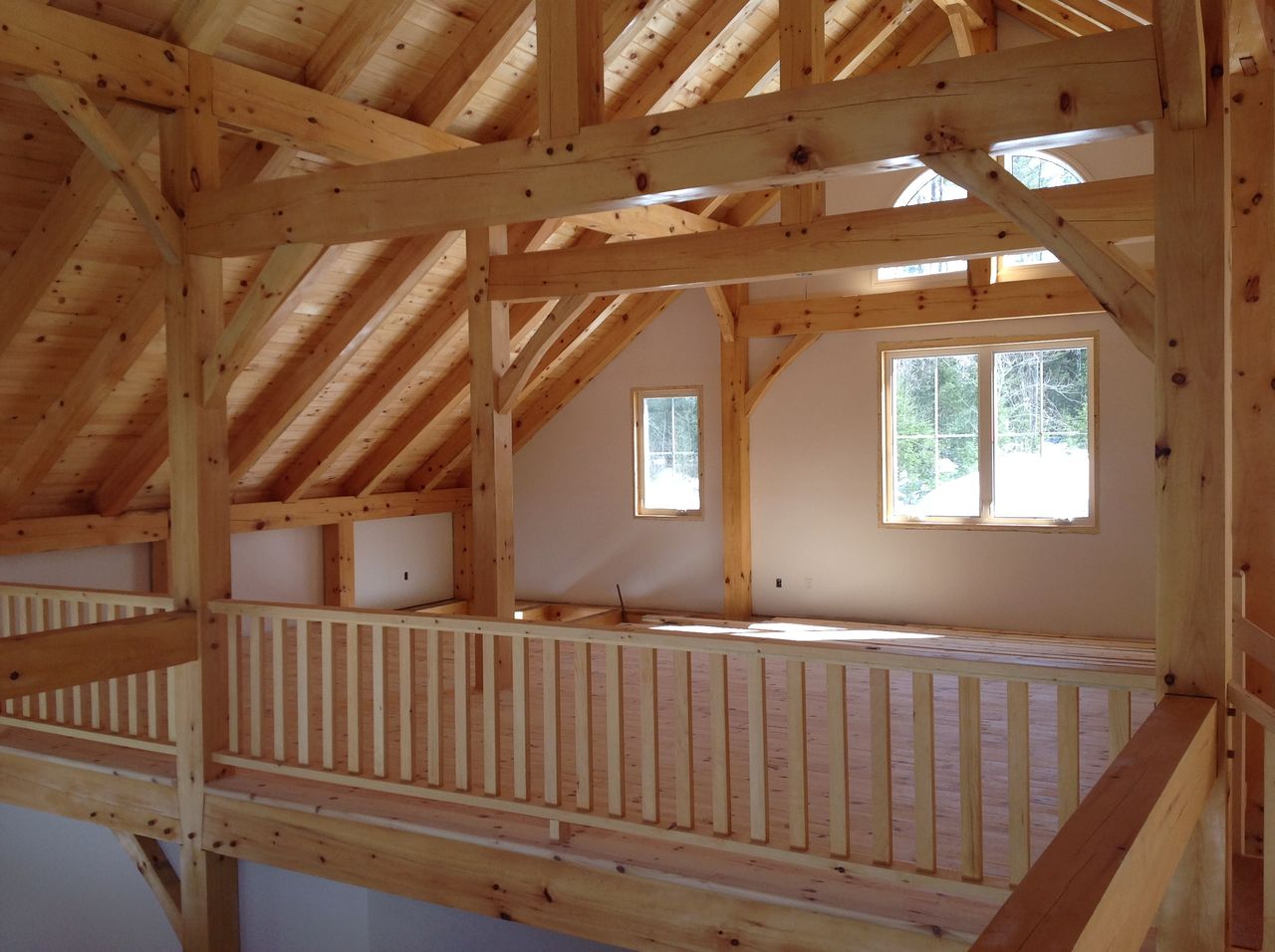 This is the short story of John R. MacDonald, master timber framer, who has built timber frame structures throughout Canada since 1975. John loves working with people as much as he loves crafting wood, and he is directly involved in designing and building all of his structures. John builds trusting relationships with his clients with the same elegance and craft that heapplies to his structures. To the delight and benefit of his clients, he does it all with ease, enjoyment, and the occasional touch of music.

At twenty-three years old, John’s first job was working for Kirt Wipper, the founder of the first Canadian Canoe Museum, hewing oak beams in the bush. Under the tutelage of Alan Mackie, founder of The School of Log Building, John learned the joy of a sharp axe and chisel.

It was Jamie Cooke, past Director of the Canadian Manufacturing Housing Association that really introduced John to the world of heavy timber; the powerful drama of artistic structure. In the late 70’s, John headed off to Tweed with Jamie and hired horse, to harvest pole rafters. Searching for a place to stable the horse, John came across John DeVries on his farm. Two weeks later, John Devries joined John and Jamie to become a log builder. DeVries later became the President of the Ontario Log Builders Association.

Jamie, on his winter vacations was visiting small timber frame shops in New Hampshire, Vermont and Maine, talking with a small group of timberframers, including Ted Benson, who went on to establish the Timber Framers Guild of North America.

In 1979 John started building timber frames in eastern Ontario with Jamie. The lure of the north took him to Combermere where he continued to log build and timber frame throughout the Madawaska and Ottawa Valleys.

In 1985, wanting to shift more into timber framing, John attended a gathering of The Ontario Log Builders Association, who’s guest speaker was Ted Benson. Due to a bad storm, many participants couldn’t make the event, which enabled a small group to pick Ted Benson’s brain for three days.

Off to the West

From Combermere, John began shipping projects all across Canada. At this time, in the mid to late 80’s, he participated in nine workshops as part of the invited panelists of the Timber Framers Guild’s conferences.

John moved to Alberta in the early 90’s when sales in Alberta increased beyond the sales in Ontario. For eight years, he happily roamed the Bow and Columbia Valleys, being involved in colourful projects. He was the firsttimber frame instructor to be hired at The College of the Rockies in Cranbrook, British Columbia in 1999.

Missing his family, John returned to Ontario. Here he started on a fabulous five-year work experience with Pliny Loucks of The Great Lakes Frame Company building houses throughout Georgian Bay and Muskoka. Once again it was the lure of the Algonquin region that brought John and his wife, Kim to beautiful Deep River, on the shores of the Ottawa River, to start

Algonquin Timber Frames in 2005. John and Kim (left) are standing in front of one of their cabins built for their tsunami relief project in 2006 (for details, see Media).